In an older post I already talked about the lack of proper information about cardinal directions in modern signage systems. Instead of using the actual words North, East, South and West or showing a compass rose, color coding can also be an easy and effective way to aid orientation.

This can be seen in the German city of Mainz. Tourists are often puzzled why some street signs are red and some are blue. In the middle of the 19th century the old and complicated system of house numbers was revised and based on a system that was successfully used before in Paris and Frankfurt. The streets leading to the river Rhine got new house numbers starting with 1 at the river side—even numbers on the right and odd numbers on the left. In addition, streets parallel to the river got blue signs (like the water!) and streets that led away from the river got red signs. 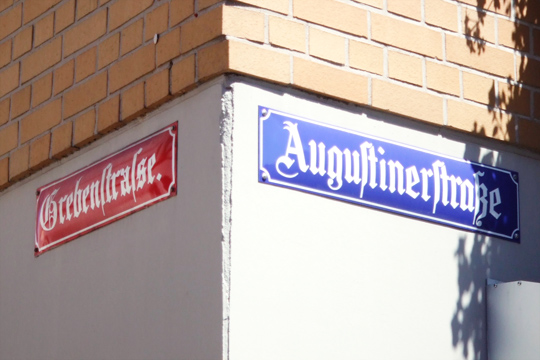 Once you understand the system, it helps you to keep your orientation while walking thru the city, even though using only two colors instead of four leaves some room for ambiguity, because at junctions the colors appear in the same way at opposite corners.

An even more interesting example was developed in the 1920s by the German designer Walter Dexel. In 1925 he installed the world’s first illuminated direction sign in the city of Jena, Germany01. 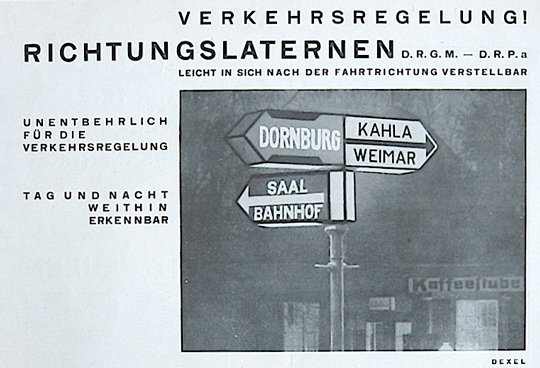 After some time of experimentation he argued that the color coding of such signs should be based on a normed color coding based on the cardinal directions, like:

The idea of these directions signs was even patented, but at the same time the German norm system DIN evolved and these regulations were later used thru out Germany. The color coding for the current direction signs is now based on the kind of target.

More in Wayfinding (9 of 21 articles)